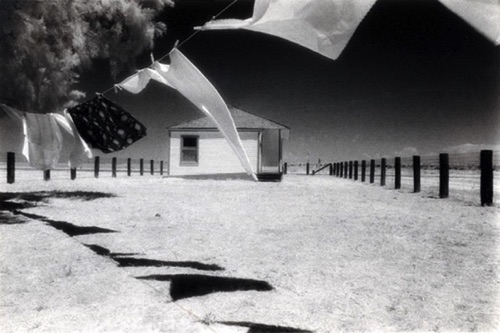 If I could do it, I’d do no writing at all here.  It would be photographs;  the rest would be fragments of cloth, bits of cotton, lumps of earth records of speech, pieces of wood and iron, phials of odors, plates of food .....

Ron was born in California in 1944, is a resident of Pleasanton CA. and began photographing in the early 1970s.  His very earliest efforts were color slides of the Sierra Nevada wilderness.  Since then, his work has included many disciplines of photography including both black & white and color as well as a few alternative processes.  He has studied with Western photographers such as Robert Dawson, Steve Dzeregian and Al Weber.  Some of the most powerful influences on his work have been from William Christenberry, Walker Evans, Philip Hyde and Eliot Porter.

Important works include his “Americana” series on disappearing icons of the American West, decaying signs, ghost town architecture and abandonded cars. Other significant essays have included the California missions and the orchards of Central California. He spent many years printing his work in a conventional home darkroom and stlll enjoys working with older silver techniques for some black and white images.   He has now become proficient in the newest digital methods and has found it is an excellent way to produce archival photographic prints in both color and black and white..